History of the Light Station

The light station located at the base of the Burlington Canal Lift Bridge (Hamilton side) has been a beacon for domestic and international ships entering Hamilton Harbour for over 170 years.

In 1823, the Burlington Bay Canal was proposed as one of a series of waterways which would open Lake Erie to sea traffic from the Atlantic. Residents supported this proposal as a way of making Burlington Bay (renamed Hamilton Harbour in 1919) into a usable harbour by linking it to Lake Ontario. Work on the canal began in 1826 and attracted labourers to the area, many of whom built homes in Hamilton’s North End neighbourhood and was done by pick and shovel by labourers who moved into houses in Hamilton’s North End neighbourhood. After six years of work, the canal opened in 1832.

A wooden lighthouse was first constructed in 1838 to guide ships to and from the harbour.  A lighthouse keeper and ferryman, whose homes were nearby, worked to maintain the light and building. Despite being adjacent to the water, the threat of fire was very real.  The first lightkeeper, George Thompson, would occasionally need to put out fires along the pier caused by either friction (created by ship hulls running against the wooden piers of the canal), or sparks from smokestacks of passing steamboats.  On July 18, 1856 the lighthouse, lightkeeper’s and ferryman’s dwellings were destroyed by fire after sparks from the smokestacks of the steamship Ranger caused an ember fire.

The lighthouse consists of a slightly tapered 55′ high circular tower with an iron lantern.  Constructed of white dolomite limestone laid in regular  courses with a round-arched doorway, it was built for $10,479.98 by the Scottish mason, John Brown, who was responsible for a series of a six Imperial towers on Lake Huron and Georgian Bay (all still standing!).  One of these lighthouses located on Chantry Island, off Southampton in Lake Huron, has been restored.  The Burlington Canal Lighthouse is a shorter version of these stone towers and bears a close resemblance to the Christian Island Lighthouse in Georgian Bay.  Like its northern cousins, the Burlington Canal lighthouse was a well-crafted structure, built to endure the harshest weather and withstand the threat of fire.

When the lighthouse stonework was complete, an interior spiral staircase was installed, and the lantern room and cap added.  The original lights were a pair of oil-burning lamps with reflectors and were the first in Canada to switch to coal oil from traditional whale oil.  At the time of its decommission from service in 1961, the light had long been electrified and was equipped with a third order Fresnel lens, now in safe storage pending restoration of the tower and lantern.  It is currently on display at the recently renovated and enlarged Joseph Brant Museum in Burlington.

The lighthouse was maintained without major repairs until 1958.  The remarkably good condition of the stonework today, after more than 160 years, bears testimony to John Brown’s exceptionally high standard of workmanship.  The lighthouse together with the lightkeeper’s cottage are the oldest surviving structures on the Hamilton Beach strip.

The architectural and historical significance of the Burlington Canal lighthouse and keeper’s dwelling was recognized by municipal designation under Part IV of the Ontario Heritage Act in 1996 but no effort was made to preserve and restore the light station until the formation of the Beach Canal Lighthouse Group in 2003 (see BCLG History). 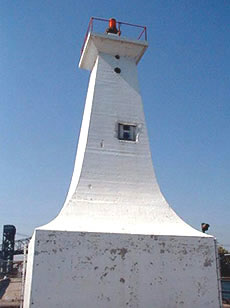 Constructed in 1856, the first (or second) front range light was a wood structure, which stood at the end of the western south pier in alignment with the main light in the lantern of the stone tower to guide boats and ships safely into the canal from Lake Ontario. It was replaced in 1910 by a 41’ tall octagonally-shaped reinforced steel concrete tower powered by a gasoline engine.  The light and foghorn were electrified in 1922.  In 1939, this structure was replaced by the present-day four-sided tapered concrete structure.  For a more detailed history of the main and front range lighthouses, visit  Lighthousefriends.com.

After the 1856 fire, the lightkeeper’s cottage was quickly rebuilt as a brick masonry structure, completed in 1857.  The builder may have been L. or A. McCallum, possibly sub-contracted by John Brown.  The cottage originally stood just south-east of the future site of the Royal Hamilton Yacht Club, facing the canal.

The dwelling was a simple 1½-storey, side-gabled red brick structure (32’ x 40’) with raised parapet end walls.  It is similar in design to the keeper’s cottages erected in conjunction with the Imperial towers and is also typical of mid-19th  century worker housing in Hamilton.  A late 19th century verandah was removed in 1945 and replaced by the existing enclosed porch.

The dwelling was relocated to its present site circa 1897 after the swing bridge for the new combined roadway and radial electric radial railway line was constructed in 1896. It stood facing Beach Road until 1962 when the roadway was realigned with the new Burlington Canal Lift Bridge to the east of the dwelling.

The last lightkeeper, Pete Coletti, lived in this dwelling for 23 years while maintaining the Fresnel light to guide ships into the harbour.  However, after the the light was automated in 1990, Pete was transferred to a lighthouse on Lake Erie and then to Gannet Rock Light in New Brunswick.

The house has since stood vacant and has been boarded up to prevent vandalism.  In 2013 a deteriorated cedar shingle roof was replaced by roll roofing, as a temporary measure to protect the structure and interior from water damage.

Over the years a series of bridges were erected and replaced, for both road and railway crossings over the canal. All of the early bridges were operable, to permit ships to pass through the canal into Burlington Bay (now Hamilton Harbour). The three bridges now crossing the canal are the Burlington Lift Bridge, immediately east of the lighthouse, and two parallel high bridges of the Burlington Skyway which carry the Queen Elizabeth Way over the canal. Eastport Drive, which swings under the Skyway to cross the lift bridge, passes very close the rear of the keeper’s dwelling, from which it is separated by a high retaining wall.

For additional information and sources for the history of the Burlington Canal Light Station, please visit our Resources page.